Some of the firsts that the baby books don’t list

You know all those baby books you get, the one that you fill out with all the babies firsts, like ‘first haircut’ or ‘first cinema trip’ or ‘first sleep through the night’? Well they are missing a few important milestones, the unspoken milestones.

Jessica was sick this morning, her first ever full on adult spew of undigested banana (*bokes). It got me thinking, there’s a few ‘firsts’ that are conveniently left out the cutesy wootsy baby books. Forever wanting to be a help to society, I will help fill those blanks in right now.

Not milky baby spit up, not even a whole feeds worth of sick, but full on startled eyes, frozen in time, full banana mixed with stomach acid coming right back at you kinda sick. It’s one thing this happening to you (oft, after a heavy night of drinking I returned a banana the same way, and it’s stuck with me), but when it happens to a mini human and they are partly horrified and partly intrigued, picking it up in amazement – well that’s something you won’t forget in a hurry – although that might be due to the fact she spewed all over our shaggy rug (*boke), it was difficult to fish out all the banana (*dry heaves).

That’s right. You’ll no be getting any form of bashing bodies. You made it through the day alive, you’ve got enough energy that your body can send blood pumping around your mangled vagina, you do the universal signal – ‘fancy a pump?’ and get your groove on. That wee bastar—bundle of joy will scream. And she will scream. And she will want a hug. Now I don’t know about you, but that’s enough to make my labia close over so tight I’ll probably need some WD40 to open it again. Sex mode is deactivated and parent mode is in full effect. There’s always next week.

Oh ha ha, we all laugh about poops in the bath its soooo funny. Hilarious. Eh naw, it’s only funny when you’re not in it. The whole thing was just traumatising. For me. I made sure I didn’t cause alarm to Jess, don’t want her freaking out over poo. So I gave it all the ‘oh look at the poop, wow!’ ‘I’ll get it, don’t worry.’ ‘Good job on the poop’. There I am congratulating jobby monster while I scooped her shit out with my BARE hands, the more I scooped the more it brok(boke)e up in my hands. Scoopy McScoop scoop. She’s no getting any more fruit and fiber!

I remember this so clearly, you know why? I was shocked, she was 9 month old and mental!! Still to this day we have no idea what it was about. She woke from a nap and well, she went crazy! Screaming and growling in a rage, throwing and ripping pieces of paper. She was in full Hulk, tearing things out from under the coffee table just so she could throw them. For FORTYFIVE minutes. Dave and I sat in shock trying to muffle our laughs – what a show we got. Or what a premonition for the future, I thought. 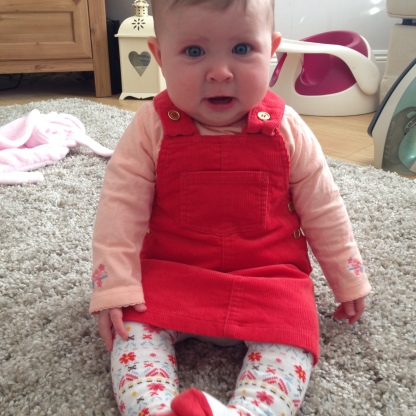 Usual arseholing for no reason

Watching my niece in her girls brigade display, Jess wants to take to the floor too. I had to drag her limp, flat laying toddler on the floor arse out the way by dragging her by her arm. I was dragging my child across the floor in front of an audience as she laughed. Everyone laughed. She’s such a wee shite. So she did it again and again and again. Obviously, I had on that one top that you need to hold to prevent your deflated tits from escaping. The more I bent over, the more my boob slid out my bra. I was exhausted by the end. Exhausted and mortified I had ‘that kid’.

Games over when they can walk. Fuck it. What have they found? What are they eating? If they have crunched and swallowed it buy the time you realize and asked them to spit it, then fuck it. It’s clearly not something that will get lodged in the throat or a massive dishwasher tablet. It’s usually a bit of dried up food out that god damn (crawling) shaggy rug.

It was Spongebob square pants, which she still loves. I got to clean my body. And this is where the bond between parent and television is formed. It’s a long lasting bond, that so far, has provided me with hours of Jess being entertained enough that she gies me peace for longer than 10 minutes.

Jess has been and always will be an arsehole. What kind of fucking monster feeds for over 10 hours straight after they get out the womb?! The same kind of monster that never napped, EVER.  Arsehole baby. Who has a short and frustrated temper (me) – arsehole baby. Who’s vein pops out her neck in a rage? Arsehole baby. Who purposely picks up things I have JUST tidied away then drops them back into the middle of the floor? Arsehole baby.

Getting her one year old immunisations. I didn’t mind the first batch of injections, she was so little she didn’t notice. But these ones, when she looks  at you, does a pause, her face drops and theeen she starts crying. Oh gosh 😦 You know she is looking to you to stop this, to comfort her. All the while you know her other leg is getting primed for another jab.

She gives me a massive two armed hug round the neck, every day, when I pick her up after work. It is the best feeling! She might drive me batshit insane, but she is my little buddy and I wouldn’t have it any other way.  Although, if she could tone down her attitude some days that would be great. And stop getting up at 7am every day. Oh and stop asking for food every 20 minutes that would be great also. 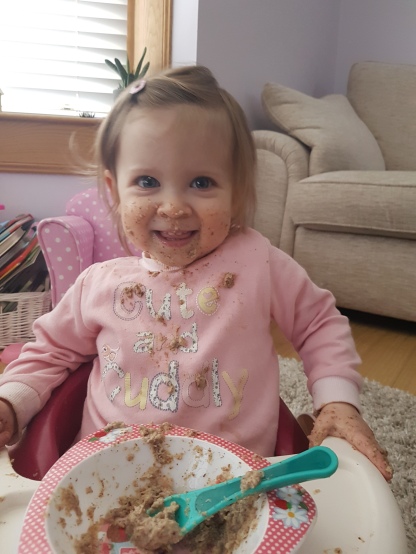 when shes not arseholing she laughing 🙂

Maybe I could pitch these to Hallmark? Could you imagine having your first child and opening the book to see these milestones?! No, you are right. We don’t want to give newbies a heads up, let them figure this shit out blindly.

What other milestones do you remember? Or should I say, milestones that you haven’t suppressed yet?