The gender neutral bandwagon has passed.

The new bandwagon is ‘gender neutral – it’s gone too far!’ 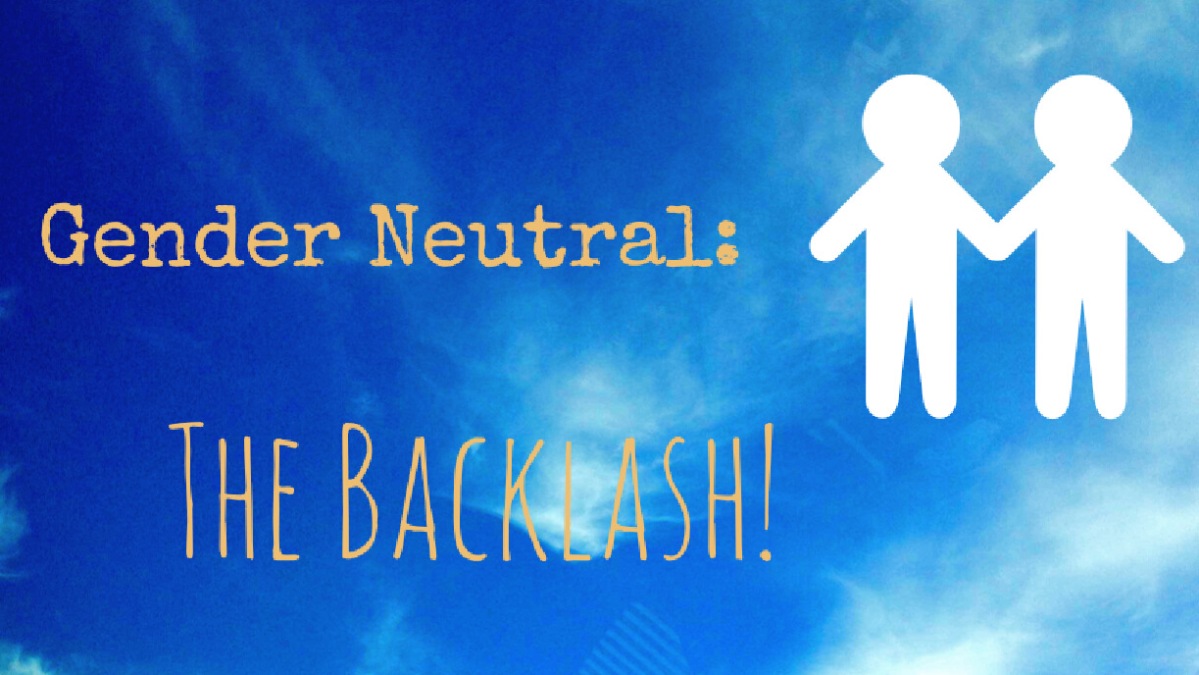 The gender neutral bandwagon has passed.

The new bandwagon is ‘gender neutral – it’s gone too far!’

Gender, or more specifically, gender neutral debates have become as popular and as heated as political, sexism, feminism, sport, vegan and parenting topics. All it takes is for a retailer to release a press statement detailing how they plan to make kids clothing, exactly that, kids clothing instead of boys and girls clothing, and, well, the comment section on that article are going to go through the roof.

Some people joy and cheer at the prospect of removing gender, and some roll their eyes and say that it’s all going a bit too far. Some people want, for themselves or their children, to have the freedom to wear and have an interest in whatever the hell they like, and some think that this gender neutral business is all just a bunch of nonsense drummed up by people with nothing better to do with their time.

I would like to remain completely impartial on the subject of gender, writing a post that examines both the pro and no gender camps, not releasing my opinion on the matter at all. However I cannot. For several reasons, many of which can be applied to a vast range of risque subjects.

Firstly, I ask why does the shift towards creating a gender neutral society bother a person? What is it that provokes a person to write a comment, to produce a comic, to write a blog on the subject? Why does gender neutral offend?

Gender is ingrained into our being as soon as we are born, whether we like it or lump it, whether we try to encourage or fight it. Wanted or not, gender is intrinsic to our being, as dictated by our own unique society and culture. Human’s have a relentless need to label and to categorize, we need it to process the world around us quickly, to make snap judgments, to protect ourself. Gender is one of many labels we assign to people, it’s a social construct that comes armed with a levy of stereotypes. It’s our unnecessary attempt to define what we term as masculine and feminine characteristics. Gender is a ‘one size fits all’ box either ‘boy’ or ‘girl’, that we are forced into, pushed to pick a box and  driven to stick to the guidelines. It is not universal by any stretch of the imagination, it differs by culture, country, sex, and time period. Even within the boxes there is variation, some boys are not masculine and some girls are not feminine. For some traits within the gender box, it’s ‘okay’ to stray from the gender stereotype, but it will be noted. Girls that like to kick a ball or build or rough house or swear or take part in an aggressive sport such as boxing will be labeled as a ‘tomboy’. Boys that like fashion or make up or interior design or candles or crafts or cheer leading or gymnastics or ballet may be called ‘girly’…or gay – and neither is meant as a compliment. Since the one size fits all box, don’t actually fit all, why bother categorizing people based on ‘gender’ at all?

The nature versus nurture gender debate has been raging for decades, seeking to establish if either sex are born with certain traits which define their gender specific characteristics or is it how we are raised, nurtured, that creates these traits. Are males more likely to take an interest in cars, fighting and the colour blue due to their biology, or is this the work of gender stererotyping? Are woman biologically geared to be the more ‘maternal’ parent and the home maker? Or is this a myth created by family interactions and gifting girls toy prams, dolls and kitchens. Both sides of the debate can put forward valid arguments backed up by as much science as is ethically possible and that is relatable. I’m not going to discuss the nature v nurture debate, that a post and half in it’s own right. There might be a root or a universal cause creating genders, who knows, but I highly doubt, even if we could decide gender was biological or created through nurture, that gender would do anything other than draw battle lines between people and cause more harm than good.

For anyone that is a gender advocate, I ask, what good has gender and it’s sterotyping done? I have sat and really thought about that question, I even asked my partner. Truly, I want to believe in something that has been, and still, is force fed down my throat every day. I don’t want to be ‘that guy‘, the class cynic, the liberal, nipple out freedom fighter, becoming so left I almost topple over, but really, I ask, what good does gender do for anyone?

I can make my peace with gender sexism...weeell, that’s not strictly true, not even a little. I can’t. It bugs the tits off me that as a ‘girl’, I’m all but invisible in a car garage, while the mechanic speaks to my partner about MY car. Likewise I’m equally peeved that it bothers me when my ‘man’ doesn’t have a keen DIY hand or that I expect him to conduct heavy duty manual jobs around the house…one’s that I too can do, but it’s ‘his’ job.

All of my personal experiences are irrelevant. What matters is that there are some people in the world that do not prescribe to either gender. They don’t fit the mold of girl or boy. They want to wear a skirt to school yet, as dictated by society, it’s unfortunate that they have been born with a penis and, at risk or persecution cannot wear a skirt outside the safety of their own four walls. We have females longing to become an engineer, but firstly must fight against the overbearing intimidation of entering an industry predominantly full of males, at least in the UK. For either sex, when one doesn’t comply to their designated gender they can face ridicule, prejudice, bullying and physical hurt.

Gender is nothing short of a barrier, a constraint for some people. Why should we dictate that a person ‘should’ or ‘must’ act a certain way because of their genitals?! Never mind the whole, ‘I’m a boy and I want to wear a dress’ palava, there are males all around the world that struggle with mental illness, to the point of suicide, and one of the main reasons the take their own life instead of seeking help is – ‘big boys don’t cry’. Men are strong, they don’t have emotions, they don’t need help, they are the backbone of the household. That is utter guff! I cannot believe anyone would support the idea of ‘gender’ when it literally kills thousands of people ever year.

There are others that conceal their true likes and identity for fear or ridicule, abuse and discrimination. Children that hide who they really are, males and females that don’t want to ‘fit’ into their gender stereotype, but will do so only to avoid persecution at that hands of society. Tradition gender roles place massive amounts of stress on family life. For the most part men are still regarded to be the ‘bread winner’ and women are the ‘motherly, home maker’ regardless if she is working or not. Women being out at work and the man being out at work is relatively recent, the roles have yet to adapt and so we see women, for the most part, working while taking on more than her fair share of home responsibilities as this is seen as her ‘gender role’. Both genders can be oblivious to this, yet it causes unnecessary strain and frustrations on a relationship. Men can feel ashamed or worthless if they aren’t earning more that their partner, as if somehow they are a failure or less of a ‘man’ for not providing for his family.

This is what I see when I think of gender. People being constrained, against their will to conform, or else. To play along with their stereotypes, on occasion hiding their true interests or becoming so enveloped by their gender they strive to become a ‘mans man’ or a ‘girly girl’. Suffering in silence, chipping away at their self worth because they don’t measure up to their gender roles. Families being torn apart due to frustration, anger and hurt at the hands of gender.

As I grow more angry and outraged as I type, I stop to pause and reflect on what I am saying. Am I mad to be so angry over a silly thing like gender, some girls do just like pink, some boys do just like cars. Some do some don’t. Is gender really so much of a big deal, or do I have a very negative and lefty view on the subject?

No, gender and it’s stereotypes are useless, no, they are fucking useless. It only serves to create pressure on people. It’s a pre-made arrangement that you are expected to adhere too. If you have a penis you better get a cold beer, go watch football and ogle at women with the ‘lads’. If you have a vagina, then you better smoother you face in make up and hate every other female on the planet, more so if she is pretty, you better get gossiping and become involved in all things bitchy and drama. Utter nonsense.

Gender neutral isn’t attacking women/girls that like pink or men/boys that like blue, go ahead, buy all the tutus you like. You can still buy a pack of beer and scratch yer man parts while watching the game, it’s not about those lucky enough to like our teams colours. It’s about those that don’t like their team, for those that want to wear a skirt with their penis, because, well that’s just what they want to wear!

At the end of the day, if the idea of gender doesn’t bother you, then go for it, sprinkle your vagina with pink glitter and sparkling crystals, be my guest. Wear as much pink as you can physically get you manicured hands on. But don’t apply your privileged and comfortable experience to those less fortune in the gender-sphere. For ever bit of comfort, warmth and self it brings to one person, it brings turmoils, embarrassment, self doubt, self hate and confusion to another. Just because you might not see the ‘big deal’ and conform to gender stereotyping does not mean that it should be broadly applied to everyone. It’s so much more than girls wearing pink and boys wearing blue, it’s a very real difference between life and death for some people.

A completely unnecessary difference between life and death. On the other hand becoming gender neutral is completely necessary, if we ever want to allow others the same freedom as all us mascara wearing, wine drinking, cozy sock wearing moaning women are privy too. How about we let people just be people and get on with it?