I just got back home

With a frown upon my face

If known for just one second how crazy it would make me!

Get out my face.

Off you fuck now

Cause it’s been 168 hours of people

And I’m about to lose my shit

Did you think I wouldn’t crumble?

Did you not realise I would want to lie down and die?

I’m just back from my holidays, despite what I may have sang above, I had a good time. Dave, Jess and my wonderful self spent a week in Embo with David’s family. They have a little house in Embo so we usually spend a week or to there every year. Embo is a lovely, quiet village in the Scottish highlands. There’s nothing much to do there but eat and sleep – so it’s the perfect place to spend with the in-laws…jokes. It’s really nice to be up there, walking along the beach, enjoying the quiet – well as much quiet as you can get with 3 kids all under 4 years old running about the place = eating everything in sight, lazing around, not having to check your phone as you get heehaw (Scottish for no/none) signal. It really is very peaceful.

I had never been up in Embo with David’s family before, even though we have been together for 11 years. So we all drove up to spend a week together, it was nice as Jess had never met her 2 American cousins, aged 3 and 18 months – carnage. I was a bit wary as I can grow tired, when I say tired I mean I get really moody, around people. Doesn’t matter who I’m with, by day 3 I’v depleted my social abilities and I’ll need to retreat and refuel in the form of naps and tears. But not this time my friends! I didn’t crack. Well, a bit maybe, but not as much as thought I would.

I was pretty surprised by my lack of crack-age. Completely shocked actually. Me? with people for over 3 days? and not breaking down into stroppy, vile, insult producing demon? Never! That’s grown (or a complete fluke), in fact I might even update my CV with my new found skill! This wasn’t the only Embo revelation:

1. I can spend more than 3 days with people and not erupt into a wild ball of moods and insults.

I would say I was the least moody person and the last to crack. Not sure David would agree but since he can’t protest this I’m going to say I didn’t get huffy or moody in the slightest for the whole week…..

2. Calories, do in fact, count while on holiday.

Despite the motto that David’s family adopt ‘I’m on holiday’ – while demolishing a family sized pack of crisps, washed down with wine – it is not a wise idea to eat until your sides hurt and you can’t move. Usually I don’t over indulge to this degree, but ‘when in Embo’ you gotta eat like the family do. I’m now the, not so proud, owner of a snack belly. It’s kinda like a beer belly but with more jiggle.

3. Holidaying with parents has it’s advantages

No I didn’t leave my child with them and hit the town, there’s no town to be hitting for a start. We didn’t leave Jess with her grandparents once, actually we did, but that was after we put her to bed, so it doesn’t count. No, the perk of holidaying with parents is they stock the fridge! And they cook! Like actual food. I ate better that week than I have all year!! I had soup most nights followed by a hearty main. And when they aren’t cooking they are buying your dinner. Result!

4. I understand David a lot more

I noticed that his parents tidy, a lot. You would think this would make Dave a tidy person. You would be mistaken, very mistaken. What I discovered is, that if you leave something at your arse (Scottish for not putting items back) it will magically be put away. How you ask? Well, the parents do it. I’m not a lazy person, but even I got caught up in this madness! I left the iron out to cool and it vanished! I didn’t realise I hadn’t put it back until the next day. You might think this is good, but if you don’t see your mess how are you meant to learn that you need to tidy it? I see why David ‘forgets’ to tidy or put things away. He’s too used to having it done for him…..

5. I hate people doing things for me

People tidying up after you is all very well and good if you are comfortable with it, but I hate it. I didn’t want to annoy the parents so I was mindful to not be a lazy moo, but come on man, there’s a line. Put my glass down, I’m still using it! I felt terrible every time his mum brought me a clean pile of washing, one that I had full intention of drying but she got up at crazy o’clock and hung it out (not that she got up at 5am to specifically hang my washing out, no, she’s nice but she’s no mental!). I don’t think they mind tidying after people, I would mind, it would drive me crazy! I’ve had it drilled into me that you try and do everything for yourself, so if someone does it for me I feel like a bit of a pest. On the flip side, I did enjoy getting a roll and bacon cooked for me while I showered and wearing freshly ironed clothes (a rare treat in my house hold).

6. Taking a potty training toddler out their usual environment it a shitty idea

Jess had been doing great with the auld potty training, of course she has the odd ‘accident’ (on purpose) moments, but as soon as she arrived in Embo she reverted to a tiny baby with no bowel control. I woke the first morning to Jess saying ‘Poo poo, wipe. I clean in’ – she has poospolded in her cot, over the sheets, the duvet, her pjs, herself. Lord above. No problem, these things happen eh? But from that moment on she just shat the place. Every morning. On the carpet. Down her trouser leg. She stood on it on one occasion. To be fair to the tiny toddler, she was majorly distracted with meeting her cousins and wanting to play with them. From that day forward she all but refused to use the potty. Wee bampot!

7. Family group naps have been established and are wonderful

This has been a life long dream for Dave and I – Jessica being old enough to know a good nap situation when she sees it. Since the birth of devil child we have longed for a group nap, it usually ends in wild child being put in her cot. She just doesn’t know how to sit still! She usually pulls and prods and sings songs while we hush her and try not to laugh. This all changed! She now knows ‘mummys bed’ is code for group nap. We all snuck upstairs and lay on the bed, every time Jess got a little too anti nappy I politely suggested that she might like it better ‘in the cot?’. She really didn’t fancy that idea so piped down, allowing us sea air tired parents to nod off and Jess ultimately gave up and joined us in a glorious family nap! I had a sneaky group nap with Jess but no Dave he next day. Genuinely, it was a the highlight of my trip!

8. I learnt that I’m shy using my mum voice in public and Jess knows it!

She’s a wee cheeky shite. I can’t even tell you how many times I went face to face with Jess in an attempt to tell her off only to receive a telling off myself with a threat of the naughty step! More often than not, it was Jess that suggested she had a stint on the naughty step, talk about emasculation man! She would get up on her own accord and head to the step, telling me ‘one minute’ was the length of her punishment. One minute! Who does she think she is! Little madam! She took this one step further and ordered her toys and her grandparents to the naughty step if they dared to be be anything other than ‘good’.  Not only do I struggle to ‘mum’ voice in public but how she has completely removed any naughty step power I held! Sheest! Jess for President I say, she’ll sort the world out in no time! I hope she doesn’t read this, I’m sure this would rack up at least 5 minutes on the naughty step for me.

9. You can relive your childhood through your children, but this time wine is encouraged!

I have really fond holiday memories of camping around Scotland, always being outdoors, using my imagination, playing in the Scottish wilderness. I loved to collect shells from the beach…I might still have a box or two of shells (and bird skulls, I know, it’s weird) in my parents loft. You can imagine my delight at Jess happily stomping her way through rock pools, collecting all the shells she spotted. She couldn’t wait to show them off to her grandparents and became quite attached to a snail, which she called ‘beast’. She didn’t forget about it and checked on it everyday. She didn’t forget about the shells either, so when they ‘vanished’ before home time I was glad she didn’t get too upset. 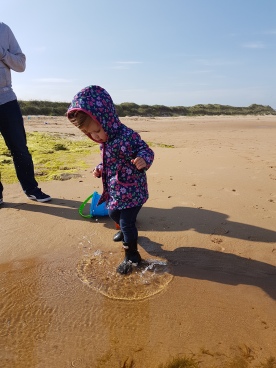 Going in to the brim of your wellies is the only way to play in the water….

Making sure her capture is safety locked away

Listen, don’t judge. It’s soppy, I know. And I’m hugely biased, I know. But Jess is a beautiful little person. This week highlighted just how kind and caring she really is. She loved her cousins from the moment she met them. She wanted nothing more than to chase them about and play. Despite a little reluctance at first, she was very happy to share all her toys. Maaaybe not so much her favouirte ones, even then she did entertain her cousins touching it, for a minute at least. Jess is a little comedian who is keen to make everyone laugh. Chicken nuggets became a weird inside joke between Jess and her cousins, Jess would gain the attention of her cousin, usually at the dinner table, and say ‘chicken nuuuuggets!’ which would make us all erupt laughing. It’s amazing to watch this tiny little thing develop into a functioning human with her own unique personality and sense of humour. I could just squeeze those chubby little cheeks right off her and keep them with me forever!

5 thoughts on “So, now I’m back from Embo-space”